As a young woman of faith, Maggie Lee felt a calling to learn more about religious life so she signed up to participate in the Diocese of Orlando’s third Nun Run. 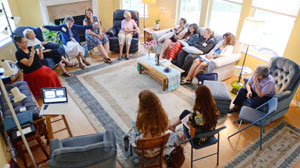 As a young woman of faith, Maggie Lee felt a calling to learn more about religious life so she signed up to participate in the Diocese of Orlando’s third Nun Run.

Lee was among seven women who participated in the summer event, June 27-30, led by Sister of St. Joseph Kathleen Power, assistant director of Vocations for the Diocese of Orlando. While her original intent was to learn more about the women who serve the Church, Lee came away with a new outlook on her faith and calling from God.

“It is our duty to know about the acts of service and charity our sisters are living out because they are such an important part of our Church,” the 22-year-old St. James Cathedral parishioner said. “Yet, God poured out so many graces upon me on this trip. He opened my heart and showed me so much about his plan for me. God showed me this weekend that to be fully alive I need to be all embracing of his graces he has given me. It gave me a lot of peace.”

During the weekend trip, the women visited four religious communities – the Sisters of St. Joseph and the Daughters of Charity, both in St. Augustine, as well as the Religious of the Cenacle in Gainesville and the Sinsinawa Dominican Sisters in Jacksonville. At each community, they shared prayers, meals and stories of vocations.

Sister Power said the purpose of the Nun Run is to provide young women with a unique glimpse into the lives of a variety of communities of consecrated women religious.

“The Nun Runs have two goals,” Sister Power said. “The first is education. These are Catholic young women and they need to know the whole tradition about consecrated life in the Catholic Church. It is very important as they grow into adulthood that they understand that this is a longstanding part of our Church. They should be able to answer simple, basic questions about religious life.

“The second goal is for those women who may feel they have a call to religious life,” she continued. “For them, it is educational but it is also a real search for the right community in which they feel comfortable. That is why, in doing the Nun Run, we try to provide an experience of different styles of religious life.”

“God poured out so many graces upon me during the trip,” said Ramano. “I was struck by the love I felt by Sister Kathleen and all of the sisters we met. They are so Christ-centered and so filled with the Holy Spirit. I felt as if I was at home with them. The Church is our family and these sisters reminded me of that.”

Although Lee and Ramano – both nurses at Orlando Regional Medical Center and both parishioners of St. James Cathedral– are not discerning a religious life at this point in their lives, they are open to whatever God has planned for them. Right now, it is a desire to form a “faith house,” where they and two other women will live in community, and much like religious sisters, share in prayer, meals and a close relationship with God.

“I feel so much more open to God’s will for my life,” Ramano said. “I realized how many things in my life were holding me back from saying ‘yes’ to God. Now I feel more free to not only say ‘yes’ but to take action. I am excited about this upcoming year and knowing that I am doing it all for the Lord. It is scary, but I am still excited.”