Go, Therefore, and Make Disciples of All Nations

As a young seminarian, Father Patrick O’Doherty read an article about World War II that ultimately shaped his priestly ministry… 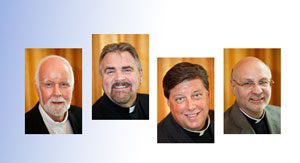 As a young seminarian, Father Patrick O’Doherty read an article about World War II that ultimately shaped his priestly ministry.

It involved the story of an American priest waiting for his flight home from the Tokyo airport. A Japanese professor approached him and asked for a minute of his time.

“I have read the Red Book of Chairman Mao, and I have also read Karl Marx and Sigmund Freud. All that stuff is rubbish,” he said to the priest. “I have also read about your Jesus and I am convinced that Jesus is who he said he was. He is the way, the truth and the life.”

The priest was very pleased to hear this and then the professor turned to the priest and said to him, “However, Father, you have not done what your founder has taught you. You have not preached the Gospel to all nations.”

“That haunted me and since I have been ordained, any time I have a chance, whether it is on the radio or in a class, I am always teaching the Gospel of Jesus,” Father O’Doherty said.

Father O’Doherty is among several priests in the Diocese of Orlando who are reaching out beyond the pulpit and sharing God’s message to audiences of all faiths through mass media.

For ten years, Father O’Doherty has been taking to the airwaves with two programs airing on two different radio stations. “Burning Hearts, Creative Inspiration,” airs Sundays at 7:30 a.m. on WOCA 1370 AM, a news station in Marion County and North Central Florida and “The Catholic View” which airs Sundays at 10:30 a.m. on WKSG 89.5 FM, a Christian station in North Central Florida. Father O’Doherty said the pre-recorded programs are centered on the Gospels of Matthew and Mark and are laced with anecdotes, stories and lessons.

He said he knows his message is being heard, as many Catholics and non-Catholics alike have stopped him to tell him that his words have touched them. A few of his listeners have even become Catholic as a result of his programs.

“I am grateful to God that I am able to do this,” Father O’Doherty said. “In that sense, it has enriched my faith. I tell other priests that they can do this, too. It is not eloquence that converts people. If you believe the message yourself, you come across as genuine.”

When Father John Giel arrived in Leesburg more than 20 years ago to serve as pastor of St. Paul Catholic Church in Leesburg, many outdated, misconceptions about Catholics existed in the small community. With the help of his parishioners and some borrowed equipment, Father Giel broadcast the first television program centered on the Catholic faith from a small Christian television station. Because the small parish could only afford ½ hour of air time, the original program was a live broadcast of the Liturgy of the Hours.

As the audience and number of broadcasts grew, Father Giel approached Bishop Norbert Dorsey with the idea of the parish starting its own production studio. Father Giel recalls that during a diocesan Finance Committee meeting at which he was seeking backing for the project, one gentleman questioned the impact a small television studio in rural Lake County would have.

“The gentleman said, ‘From Leesburg?’ to which Monsignor Patrick Caverly replied, ‘That is what they said about Nazareth.’ Monsignor’s words were a beautiful statement and a declaration to what we were doing,” Father Giel said.

Today, the small television studio, Catholic Community Television Network (CCTN) has grown into an internationally recognized, award winning network with a wide variety of Catholic programming, including Sunday Mass that airs Sundays at 2:00 p.m. on WTGL-TV 45 to serve the homebound community. Father Giel is also co-host of Christifidels, a show that profiles people of faith.

“We are doing what we intended to do because the programs on CCTN have changed the attitudes and understanding of a lot of people. We are spreading the Good News,” Father John said. “To me it’s an answer to the Pope’s call to evangelization. We need to make every effort to make certain that God’s word is known and shown to other people. We are called to evangelize and tell people about the message of Christ, and sometimes we use words.”

Father Walker’s love of music dates back to his childhood, when he would tag along with his father to watch him practice and perform in community theater. Father Walker carried this passion throughout his life, and after being ordained into the priesthood, integrates song into his ministry. He will even sometimes sing an inspirational song after his homily.

At the request of his parishioners, Father Walker began recording his songs, with the help of Patrick Armstrong, owner of Parc Records in Maitland, and one of Father Walkers’s former parishioners at St. Charles Borromeo Catholic Church in Orlando. Today, Father Kent continues to share his gift through his CDs and multiple concerts.

“I hope my music brings truth to people,” Father Walker said. “I don’t sing a song unless I believe in every word I am singing. It is great to be able to look out in the audience and see people connecting to it, closing their eyes, wiping away a tear, being touched on a deeper level. It is not entertainment, even though it could be entertaining, I see people connecting on a deeper level.”

“I believe we are all God’s instruments. He picks us up and plays a tune through us and everybody has something to sing or say through their life.”

Society of Most Precious Blood Father Ben Berinti promotes God’s Word using the printed word – books. He first pursued writing with the simple intent of offering his parishioners added insight to God’s message. While serving as the pastor of St. Andrew Catholic Church in Orlando and Nativity Catholic Church in Longwood, Father Berinti wrote a weekly column of spiritual essays and reflections for the Sunday bulletin. Before long, parishioners were sharing his columns not only with their family and friends but also with those who had drifted away from the Church or who were exploring the Catholic faith.

In 2011, Father Berinti published “Firestarters: For the Seasons of our Life,” (published by Outskirts Publishing) a compilation of his pastoral, spiritual writings. He followed that publication in 2012 with “Tucked in the Rocks: Life Lessons from the Land of Enchantment,” a collection of spiritual insights he gained during a seven year period of personal retreats in New Mexico.

Father Berinti said he tries to open his writings with a human experience then offers a faith reflection about that experience before returning to the life message.

“I very much try to connect faith with life,” said Father Berinti, who was recently appointed director of Catholic Campus Ministry at the University of Central Florida. “For me, our faith experiences are ultimately interwoven with our life experiences. Faith is a way of looking at life, from the God perspective, the Christ perspective and the Spirit perspective. I hope through my writing that I am helping people see the everyday experiences with eyes of faith. I hope it fuels the faith life of people and help them see that faith is rooted in everyday life.”