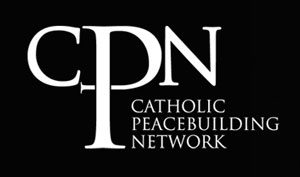 HOLD THE DATE: Conference on Pacem in Terris at 50, April 11-12, 2013, The Catholic University of America, Washington, D.C. On April 11-12, 2013, the CPN and more than a dozen Catholic universities and agencies will sponsor a major conference on peace to commemorate the 50th anniversary of the encyclical, Pacem in Terris.  In addition to commemorating the encyclical as a living document that remains fresh today, this conference is intended to contribute to animating peacebuilding as a priority for Catholics in the United States and to focus attention on ways in which Catholic perspectives on peacebuilding can contribute to the wider debate on the responsibilities and opportunities for peacebuilding in U.S. policy.

Catholic Leaders convene in Rome on peacebuilding Forty-five Catholic leaders from two dozen countries gathered at the Pontifical Council for Justice and Peace in Rome on May 29-30, 2012 for a seminar, “New Challenges for Catholic Peacebuilding.” The seminar was sponsored by the Pontifical Council for Justice and Peace, and co-sponsored by the Catholic Peacebuilding Network and Caritas Internationalis, in collaboration with the University of Notre Dame’s Kroc Institute for International Peace Studies, Catholic Relief Services, Catholic Theological Union’s Bernardin Center for Theology and Ministry, The Catholic University of America’s Institute for Policy Research, the Institut für Theologie und Frieden in Germany, Pax Christi International, and the University of San Diego’s Joan B. Kroc School of Peace Studies.  The texts of talks and the program are available at the CPN website.

Workshop on peace studies for leaders of Catholic universities in Africa On June 18-23, 2012, in Kinshasa, the Democratic Republic of the Congo, Fr. William Headley, CSSp (University of San Diego Kroc School of Peace Studies), Professor Laurie Johnston (Emmanuel College), and Professor Daniel Philpott (University of Notre Dame Kroc Institute) presented a workshop on teaching peace studies from a Catholic perspective and integrating peace and justice themes across the curriculum for the General Assembly of the Association of Catholic Universities and Institutes of Africa and Madagascar. Outlines of the presentations and background materials are available here.

CPN research associate position opening The Kroc Institute for International Peace Studies at the University of Notre Dame is hiring a Research Associate to work on projects related to the Catholic Peacebuilding Network, including research, editing and writing projects; planning and conducting conferences, seminars, and workshops; and developing content for a research-oriented website. For information and to apply go the University of Notre Dame Human Resource website.

Church opposes Balkanization of the Democratic Republic of the Congo In response to major new fighting in eastern Congo (North and South Kivu), on August 1,  all the dioceses of the DRC participated in marches to protest the on-going war and plans for the “Balkanization” of the country.  Organizers estimated that 200,000 participated in this nation-wide protest.  During the General Assembly of the Conférence Episcopale nationale du Congo (CENCO), July 2-6, the bishops issued a major statement expressing “profound consternation” about the renewed fighting and elaborating their concerns about the “Balkanization” of the DRC.  For the full text see the CENCO website.  This statement followed a more detailed message issued by the bishops of the Episcopal Assembly of the Bukavu Province on May 31.  The bishops’ statement is available at the Africa Faith and Justice Network website.

Colombian bishops address stalled peace process and mining At the Plenary Assembly of the Bishops of Colombia, July 9-13, the bishops urged the government and guerrillas to resume peace negotiations.  They also examined the issue of mining as well as the law on land restitution and compensation to victims of conflict.  The news reports on the bishops’ assembly are at The Vatican Today and Portafolio.co.

Church in Nigeria confronts new terrorist violence On June 26, the Catholic Bishops’ Conference of Nigeria issued a statement on the increasing terrorist violence, including “cowardly” attacks on churches and ordinary citizens, in northern Nigeria.  In the statement, the bishops reiterated their commitment to “continue to preach peace, love, and forgiveness,” but warned that “if there is no clear and concrete sign of improvement, the patience of many Christians will wear out, our sermons of restraint will fall on many deaf ears, and those who see violent reprisals as justified deterrence will fall beyond our control.” The full statement  is available on the Catholic Secretariat of Nigeria website.

New Pax Christi International secretary general José Henríquez, from El Salvador, has been appointed the next Secretary General of Pax Christi International. He coordinated Pax Christi’s Latin America and Caribbean Consultation in 2007, and has served as executive director of the Fundación Marista, and chair of the Justice, Peace and Integrity of Creation Commission of the Guatemalan Conference of Women and Men Religious (CONFREGUA).

Seminar on Catholic theological ethics and the African Synod On August 21-23, Hekima College Jesuit School of Theology and Institute of Peace Studies will host an expert seminar on Catholic Theological Ethics in Africa after Trento: Engaging the African Synod.  The seminar will address issues of peace, justice, reconciliation, and sustainability.  For information on the series of seminars related to the project, read Catholic Theological Ethics in the World Church website.

AMEN Project on Sudan The AMEN Project (Artists Movement to Engage Nonviolence), a multi-religious committee of artists, architects, and human rights activists associated with Boston College, is producing all the artwork for the rebuilding of a church in Khartoum, Sudan, which was burned down in religious violence on April 21, 2012. A videotaped interview on the situation in Sudan with Fr. David Hollenbach, S.J., is on the Center for Human Rights & International Justice website.

Extractives and Equity: An Introductory Overview and Case Studies from Peru, Angola and Nigeria This publication (109 pages) discusses common economic, governance, environmental and public health impacts of poorly managed extractive industries at the local and national levels as well as their links with conflict. The case studies describe the programmatic responses by CRS, the Church and other partners to address these factors and improve equity in Peru, Angola and Nigeria.  The full text is available in English and soon to be available in Spanish and French.

Colombia the Current Panorama: Victims and Land Restitution Law 1448  This document outlines how the Victims and Land Restitution Law (Ley de Victimas y de Restitución de Tierra, June 2011) has been a positive step forward in providing a legal framework for the reparation of victims and the restitution of the land from which they have been forcibly dispossessed.  It also addresses the challenges in implementing the law. It was produced by ABColombia, which consists of CAFOD, Christian Aid (UK and Ireland), Oxfam GB, SCIAF, and Trócaire.

Church in Colombia and the peace process in the 1980s The Catholic Church has been formally and informally involved in the national peace process in Colombia for decades.  For an analysis of the Colombian bishops’ engagement in the peace process during the 1980s, see “La participación del episcopado colombiano en las negociaciones con la insurgencia:  orígenes y debates (1982-1990),” in Civilizar 11 (20): 97-114, enero-junio de 2011.

Ethics of Human Rights: The African Contribution, by Richard N. Rwiza In this book, Richard Rwiza, head of the Department of Moral Theology at the Catholic University of Eastern Africa (CUEA), explores an ethic of human rights from a distinctively African perspective.  Available from CUEA Press: publications@cuea.edu.

Peace spirituality Pax Christi has issued its second collection of stories and reflections on how people around the world respond in faith to violence. This resource’s “stepping stones” describe Pax Christi’s vision and mission and begin to articulate a spirituality of peace rooted in the lived experiences of persons and communities engaged with the Pax Christi International movement worldwide.

Church response to social justice challenges in Asia A resource kit (CD and 98-page booklet; Fr. Nithiya OFM, ed.) on the Church’s response to social justice challenges in Asia is available from the Office of Human Development of the Federation of Asian Bishops Conferences.  These educational materials were developed in conjunction with the Bishops’ Institute of Social Action VIII, held January 18-24, 2012.  Available from: ohdcontact@gmail.com.

Learning portal for design and evaluation of peacebuilding The Learning Portal for Design, Monitoring & Evaluation for Peacebuilding is a community of practice for peacebuilding professionals. It provides a transparent and collaborative space for the sharing of evaluation reports and data, methodologies and tools, best and emerging practices, and events.

The Catholic Peacebuilding Network (CPN) is a voluntary network of practitioners, academics, clergy and laity from around the world which seeks to enhance the study and practice of Catholic peacebuilding, especially at the local level.  The CPN aims to deepen bonds of solidarity among Catholic peacebuilders, share and analyze “best practices,” expand the peacebuilding capacity of the Church in areas of conflict, and encourage the further development of a theology of a just peace.  While it is a Catholic network, the CPN believes that authentic and effective Catholic peacebuilding involves dialogue and collaboration with those of other religious traditions and all those committed to building a more just and peaceful world.