Faithful Catholics from the Western, Central and Eastern Deaneries have come together to celebrate their contributions which met and exceeded the goal of $150 million in pledges during the Diocese of Orlando’s first-ever capital and endowment campaign, Alive in Christ.

Faithful Catholics from the Western, Central and Eastern Deaneries have come together to celebrate their contributions which met and exceeded the goal of $150 million in pledges during the Diocese of Orlando’s first-ever capital and endowment campaign, Alive in Christ.

The Diocese of Orlando launched the Alive in Christ Campaign with the ambitious goal of raising $150 million to fund the capital and endowment needs of parishes and missions as well as the broader diocesan community. If the goal was bold, the timing was even more so: The campaign began during a time of economic downturn.

“This is an occasion to thank you for what you have done over these last few years, not only for the diocese but also for your parishes,” Bishop John Noonan told those who gathered at each celebration. “This is an accomplishment. This is a day that we thank the Lord for your generosity and care for the Church.”

The campaign was conducted in a series of “waves,” beginning with a pilot wave of 10 parishes and eventually expanding to include all parishes and missions in the Diocese of Orlando.

Although pledge collection is expected to continue through 2017, the impact of the campaign can already been seen and felt throughout the nine counties of the Diocese of Orlando. The Catholic Foundation of Central Florida, which manages the campaign, reports that more than 70 percent of parishes have moved forward with long-awaited projects ranging from new church construction to ministry expansion.

Sixty-five percent of funds raised from parishes will remain with the parishes, and 35 percent will support the larger diocesan priorities, such as tuition assistance and Catholic Charities of Central Florida, “to help grow, lead and share into the future,” Bishop Noonan said.

Over and over, people in attendance expressed the common theme of community. Shirley Studenc of St. Francis of Assisi Catholic Church in Apopka said, “We are a community and in a community you have to work together and reach out and help each other because you never know when some group is in need.”

St. Francis of Assisi Catholic Church is using Alive in Christ funds to improve its parking lot, as well as renovate other parish infrastructure.

Marcos Boronat was among several parishioners from St. Clare Catholic Church in Deltona who attended the celebration for Volusia County. Each week, the parish hosts three different religious education classes because there are so many students and the classrooms are too small. St. Clare will use Alive in Christ funds to build bigger classrooms and renovate other parts of the building. 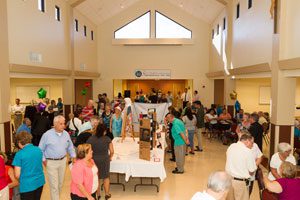 “It is right and just to contribute to this campaign,” Boronat said. “It helps every corner of the community. It doesn’t just help one person; it helps everyone.”

Also attending the celebration for Volusia was Father Phil Egitto, pastor of Our Lady of Lourdes Catholic Church in Daytona Beach. Among several projects, Father Egitto said his parish used Alive in Christ funds to move and renovate the school office; permanently replace the school roof, which will prevent leaks and other weather-related problems; add air conditioning to the chapel; and create a center for rummage sales. The new center helped raise $35,000 over one year.

The parish was honored by the city of Daytona Beach with a beautification award, after replacing signage and painting the exterior of the church building. The parish also has plans to add a new school playground.

“Certainly, with what we received and what we’ve done, we are most grateful to the Alive in Christ campaign,” Father Egitto said.

“I thank you, congratulate you and above all recognize especially your pastors,” Bishop Noonan said. “I thank you — the people who worked so hard in each parish and captured that dream of fulfilling each and every parish’s goal. As you look around, you will see the people, the parishes and the projects they accomplished. I am truly blessed to have become your bishop in the middle of this campaign because I truly see a hope for the future.”